My beautiful cat, come onto my heart full of love;
Hold back the claws of your paw,
And let me plunge into your adorable eyes
Mixed with metal and agate. 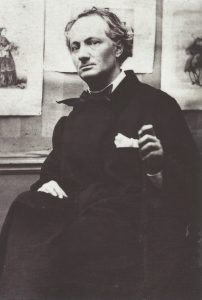 Some writers argue he was ahead of his time, and some of his work was considered notoriously risky, even identified as obscene. But, Baudelaire’s influence on the direction of modern French and English language literature was considerable. His reputation rests primarily on Les Fleurs du Mal, The Flowers of Evil, which according to the Encyclopaedia Britannica was perhaps the most important and influential poetry collection published in Europe in the 19th century. The collection included his homage to cats and cat lovers are probably very well aware of his work as his quotes observing and praising cats are in abundance.

It is said that he was a sensitive soul, who seemed more at home with cats than humans. Indeed, he once complained in a letter that it was impossible to live with his mistress, Jeanne, who drove away his cat and brought in dogs! Baudelaire also had a reputation for entering a house and ignoring the human occupants, favouring and giving his full attention to a resident cat instead. He is widely reputed to have owned Chartreux, although this cannot be verified.

Time spent with a cat is never wasted. 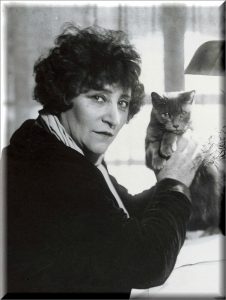 Sidonie-Gabrielle Colette was a French author, music hall performer, mime artiste, journalist and woman of letters nominated for the Nobel Prize in Literature in 1948. She lived a bohemian lifestyle, married three times and had numerous affairs with both men and women.

Colette was a member of the Belgian Royal Academy. She was also the first woman to join the Goncourt Academy, and in 1953 she became a grand officer of the Legion of Honour. When she died she was accorded a state funeral, attended by thousands of mourners.

She was a passionate lover of animals and she was devoted to her pets, in particular her cats. She bought her first Chartreux called La Chatte in 1926 from a cat show where she fell in love with the breed. The novel La Chatte, The Cat, written in 1933 was based on her and concerned a love triangle between a man, his new wife and his Chartreux cat called Saha. Needless to say, the cat won the man! 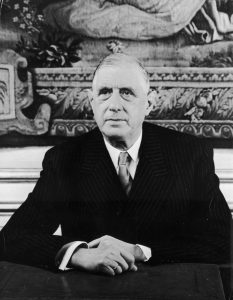 Charles André Joseph Marie de Gaulle, the most famous of all French statesmen, was unusual in that unlike most presidents of France, he had a cat instead of a dog.

De Gaulle had a preference for dogs, but when Madame Yvonne de Gaulle bought a Chartreux during her husband’s second term as President, he was captivated by this handsome tomcat with its strong personality.

The cat had the pedigree name Ringo de Balmalon, but de Gaulle gave him the pet name Gris-Gris, Grey-Grey, which was a clever play on words for not only did it describe the colour of the cat, but the name can also refer to an African lucky charm. He became de Gaulle’s devoted companion, reportedly accompanying him on his walks in the park and silently following him from room to room.

Gris-Gris was even a frequent topic of conversation with de Gaulle’s Minister of Cultural Affairs, André Malraux during the Council of Ministers. Malraux was also a cat lover owning Lustrée and Fourrure. It is reported that one day, in response to a question from Malraux, the General replied, no doubt inspired by Gris-Gris, “Kittens play, Cats meditate'”

Sadly, despite an extensive search, it has not been possible to find a picture of de Gaulle and his faithful feline companion, so we would like to acknowledge Dorica Lucaci for writing about Gris-Gris in her fascinating book 100 Chats Qui Ont Fait L’Histoire.