This is a quote from Jean Simonnet’s book “Le Chat des Chartreux”; a study into the origin and history of the breed:

“I am inclined to think that these blue cats originated in the rugged, mountainous regions of Turkey and Iran, from where they were probably brought into the neighbouring territories of Syria”.

Their unique coat indicated that they lived in damp areas with cold nights and harsh winters. They were probably brought to France by returning Crusaders or merchants in the 13th century. The cats adopted France with all their native vitality and intelligence and the country adopted the breed. 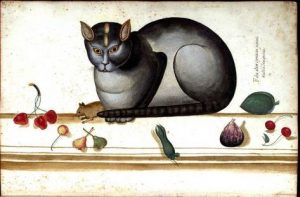 ries of these blue cats really began to emerge during the 16th century. Ulisse Aldrovandi (1522-1603) described a ‘cat of Syria’ with a blue-grey coat, stocky body, developed jowls, strong paws and two slightly almond-shaped eyes of an ‘astonishing’ colour. He noted that they were well-tempered, vigilant, loyal to their master and ready for the hunt. The rodent at its side marked its hunting abilities, which is what attracted Aldrovandi to these cats.

It is their hunting prowess which has led to one of the most charming explanations as to how the cat got its name. Legend links the Chartreux cat to the Carthusian monks. The story goes that these excellent mousers were used by the monks to keep the vermin down in their cellers where they stored the ingredients and vats of Chartreuse liqueur they made. Some writers have noted that as a ‘silent’ cat they would have be particularly well suited to monastic life, especially as the Carthusian monks are a contemplative (silent) order. 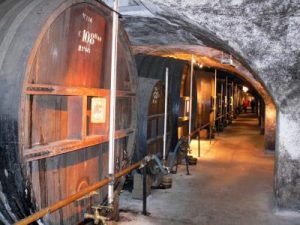 Certainly their thick ‘waterproof’ double-coat and shortish legs would have been ideal for those damp, dark cellars. Unfortuately, this interesting story cannot be verified and in 1972, the Prior of the Grande Chartreuse stated that their archives were silent on the breed of cat that had been used by them.

It is possible that these cats were actually named after the luxurious Spanish wool “la pile des Chartreux” because of the soft and slightly woolly character of the coat. However, the exact origin of the name remains unclear.

A little of my heart dies

when I talk or write of him

Belaud who was by chance

the most beautiful work that

nature has ever made in the form of a cat

it was Belaud who brought death to the rats…

The name ‘Chartreux’ was first mentioned in the “Dictionnaire Universel de Commerce” by Jacques Savary des Brûlons, published in 1723, in which it was defined as

“the common name of a type of cat which has a blue coat. Furriers do business with their pelts”.

Because of its luxuriant thickness, Chartreux fur was often dyed and sold as the more desirable otter fur.

So, although known as the “Cat of France”, they were also referred to as “the cat of the common people”. They did not lead easy lives, as they were valued for their pelt, their meat and as ratters. As Jean Simonnet noted in his book ‘The Chartreux Cat’, whilst Persian cats were celebrated by poets, treated like princes and were companions of royalty, the Chartreux wandered the streets of Paris fending for themselves and always in danger of losing their hide to a furrier.

This is what the J. Paul Getty Musuem says about this painting:

“With both hands, Magdaleine grasps a large gray-blue cat that bemusedly engages the viewer. Because of its large size and distinctive coloration, the cat can be identified as a chartreux, one of the oldest and most cherished French breeds. Jean-Baptiste Perronneau included feline companions in several of his portraits of female subjects, reinforcing the elegance and sophistication of his sitters. Here, the bells on the chartreux’s collar echo the pearls around Magdaleine’s neck, suggesting that cat and sitter alike are refined objects for visual delectation.”

Buffon and other later naturalists also documented their studies of the Chartreux. These descriptions were used by the early breeders for putting together a “Chartreux breed standard”. The first official breed standard was accepted by  Fédération Féline Française (FFF) in 1939.

Although there was not a large population, natural colonies of these cats were living in Paris and in some isolated regions of France until the early 20th century. However, the first and second world wars were to decimate the breed. After WWI  no major breeding colonies of pure Chartreux were known to exist, so some French breeders became interested in preserving this ancient breed for posterity.

One colony was found living on the island of Belle-Île off the coast of Brittany. They were known locally as the ‘hospital cats’ as they lived in the grounds of the local hospital. In about 1925, the Léger family settled on Belle-Île. Two sisters Christine and Suzanne Léger began monitoring the cats, helping to care for them and eventually began selective breeding under the cattery name “de Guerveur”. These cats became the nucleus from which the modern day Chartreux now descend. 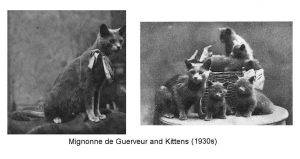 Around the same time, Cat Club de Paris gained autonomy and opened its own Book of Origins. They also became interested in the Chartreux and started a breeding programme with blue cats from the wild using cats found in the Massif Central (a highland region located in the middle of southern France). To reduce the difficulty in obtaining copper eyes, in 1936 they utilized a Blue Persian to improve the eye colour.

WWII severely curtailed these breeding efforts and the devastation of war left the Chartreux cat population in a perilous state. The surviving Paris Club cats were blue but with some Persian blood which meant they were stockier and chubbier than the Belle-Île cats. The surviving Belle-Île on the other hand were naturally lighter and more elegant, they also had woollier coats (probably from the harsher climate and conditions on the island). The Belle-Île cats did have good eye colour varying form yellow to copper.

Despite the two breeding stocks being different, in 1953 the Léger sisters acquired a male cat from the Paris Cat Club who in turn acquired a female from Belle-Île. Finally in around 1960 the Paris Club breeders succeeded in removing the influence of the Persian cat genes whilst preserving the improved eye colour.

But, by the mid 1960s the Cat Club’s stock was very inbred. Because of the ignorance of the history of the Chartreux, and the lack of knowledge of the selective breeding of their predecessors, the breeders at that time, started to cross-breed their stock with the British Blue.

A good way to describe how disastrous this was to the breed is to consider this; a British Blue is just one colour variation of the British Shorthair and it can be descended from another colour. The colour is a secondary characteristic. Indeed, there are many colour variations, bi-colours, colour-points as well as patterned varieties. As previously noted and classified by Linnaeus and Buffon, the Chartreux is a distinct breed with only one colour i.e. grey-blue and this primary characteristic is firmly established genetically.

Perhaps if only one or two British Blues had been used in cross-breeding and the offspring were then rigorously selected the injury would not have been too significant. But there were far more British Blues than Chartreux and their genetic influence on the breed was significant and affected the Paris Club stock.

Thankfully, cross-breeding is now not allowed by LOOF, CFA and TICA.

“A clear distinction should be drawn between the Chartreux and the Russian Blue and the British Blue. Crossing the Chartreux with these two breeds is undesirable”.

Inspite of all the adversity, a small number of breeders had continued to breed pure Chartreux. Chartreux in the 20th century endured a number of setbacks, almost extinction of the breed due to two world wars, ill-advised cross-breeding, brief amalgamation with the British Blue and in some countries it ended up as a minority breed or unrecognised. Indeed, here in the UK the Chartreux only received preliminary recognition in October 2017 and the club is still working on attaining full recognition.

That’s a lot of history for such an undemanding cat!

With thanks to Jean Simonnet’s book “The Chartreux Cat” from which a lot of the history on this page is drawn.